The science twitter community can be a hugely beneficial resource, it can also be overwhelming if your new to it. I asked the scientists of twitter what platform they were using to interact with twitter itself (‘for a thing’). This post is not the thing I was eluding too, but the poll threw up a few tips I thought it worth drawing attention too and I figured I’d chuck some of my own tips in while I was at it.

What platform are you (scientists) using to interact with twitter? Reply if your preferred app isn’t listed. It’s for a thing….

I was kind of surprised by this result. A few years ago no one used the native twitter app (it was useless). A sign of how much twitter has grown and how much effort they’ve put in to closing off their API.

My own set up: tweetdeck on my laptop at work, twitter for iOS on my phone; most of the alerts turned off except mentions and direct messages (for now). I do have multiple twitter accounts, but the phone app does a good job here too.

Steve Royle (@Clathrin) reminded me that tweetdeck gets rid of adverts and that is definitely a plus. He also mentioned lists and filtering. According to my (small sample almost useless) poll only 10% of sci-twitter is using tweetdeck. So, it seemed worth my while to expend some effort showing how you can get a bit more out of sci twitter with tweetdeck.

Rather than the standard single timeline view, tweetdeck gives you a window to assemble multiple time lines. The key here is that the timelines can be many different types: lists, hashtags, collections, your notifications etc. You can have tweetdeck as a separate app or load it in your browser just like regular twitter (tweetdeck.twitter.com). Here’s a clip of mine: 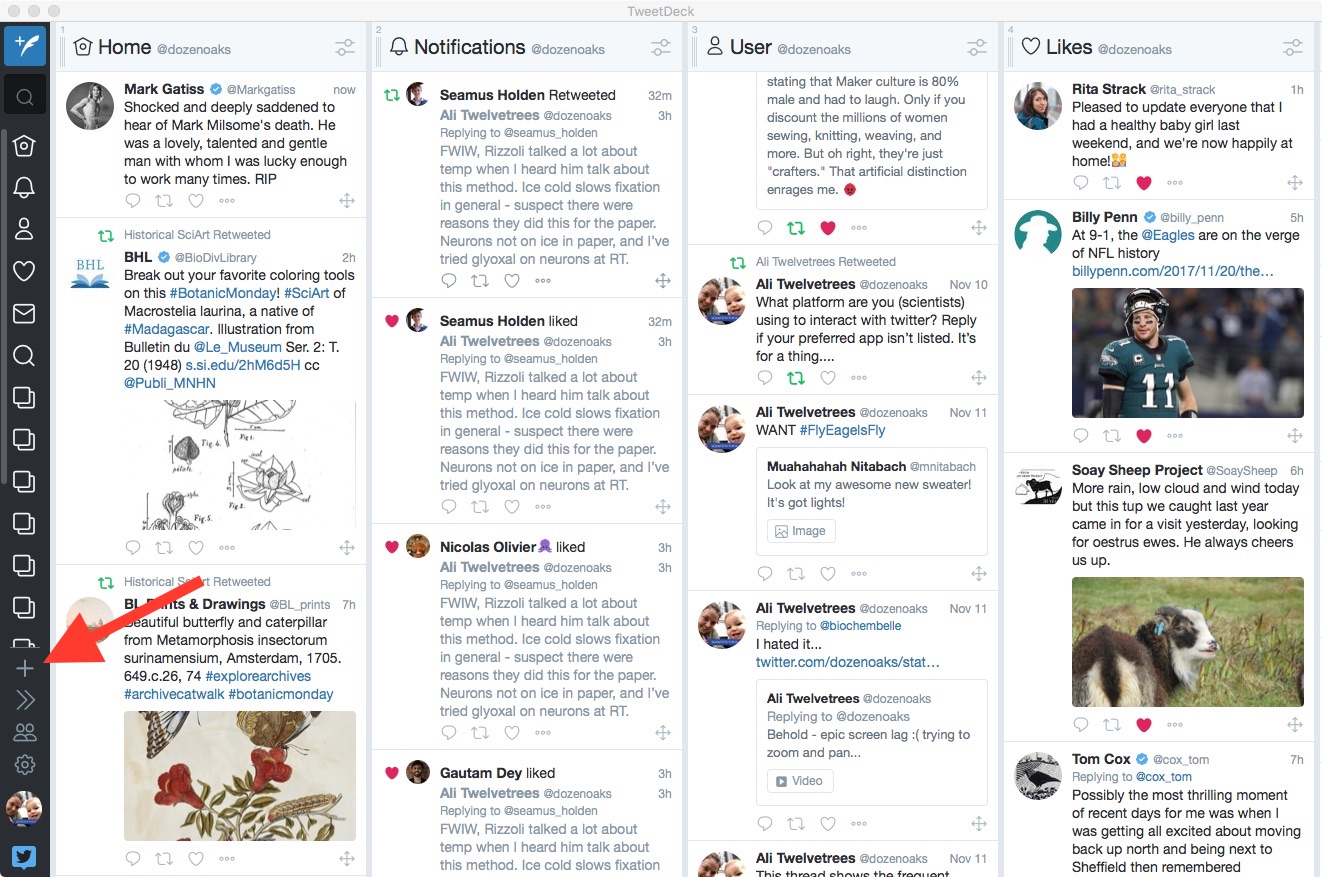 And if you press the ‘plus’ button you will bring up the window of options for what timelines you can add. You can use it to manage multiple twitter accounts, but it’s far more useful than that.

Lists are really good for keeping up with different groups of people, especially as a timeline with hundreds of members can be difficult to keep on top of. As you don’t have to follow a person to add them to a list, you can just check in to get the news in a given area. Your lists can also be public or private. A good example might be to make a list of accounts that tweet papers you’re often interested in, having them together in a short list means your less likely to miss something.

By clicking on the search button you can also create a time line that follows search strings or hashtags. This is particularly great for following meeting hashtags. Dave Mason wrote a great blog post on live tweeting from conferences already, so I’m not going to repeat it here. Some of my searches as an example: 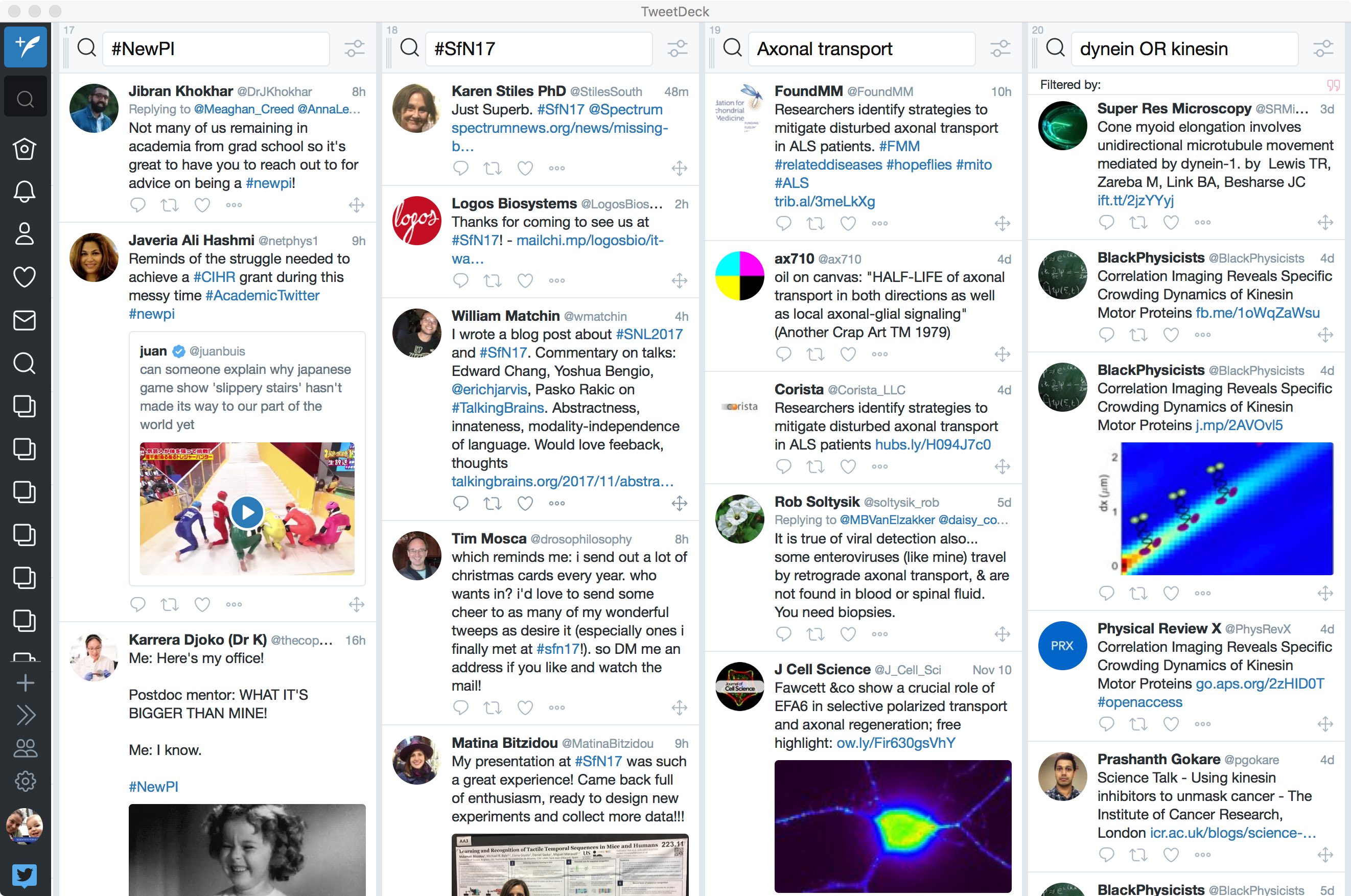 Filter and search a timelines

At the top of each timeline is a set of filtering/search criteria that you can use to narrow down your results. It’s worth exploring. For example, you can turn off everybody’s retweets with a click, or exclude certain words (like, I don’t know, “Trump” or “Brexit” if you’ve really had enough for the day). Searching your own timeline (or your likes) is really useful to be able to find that paper that looked kind of interesting, but you can’t quite remember. The search is kind of slow and not super awesome on older content, but it can still be quite useful. 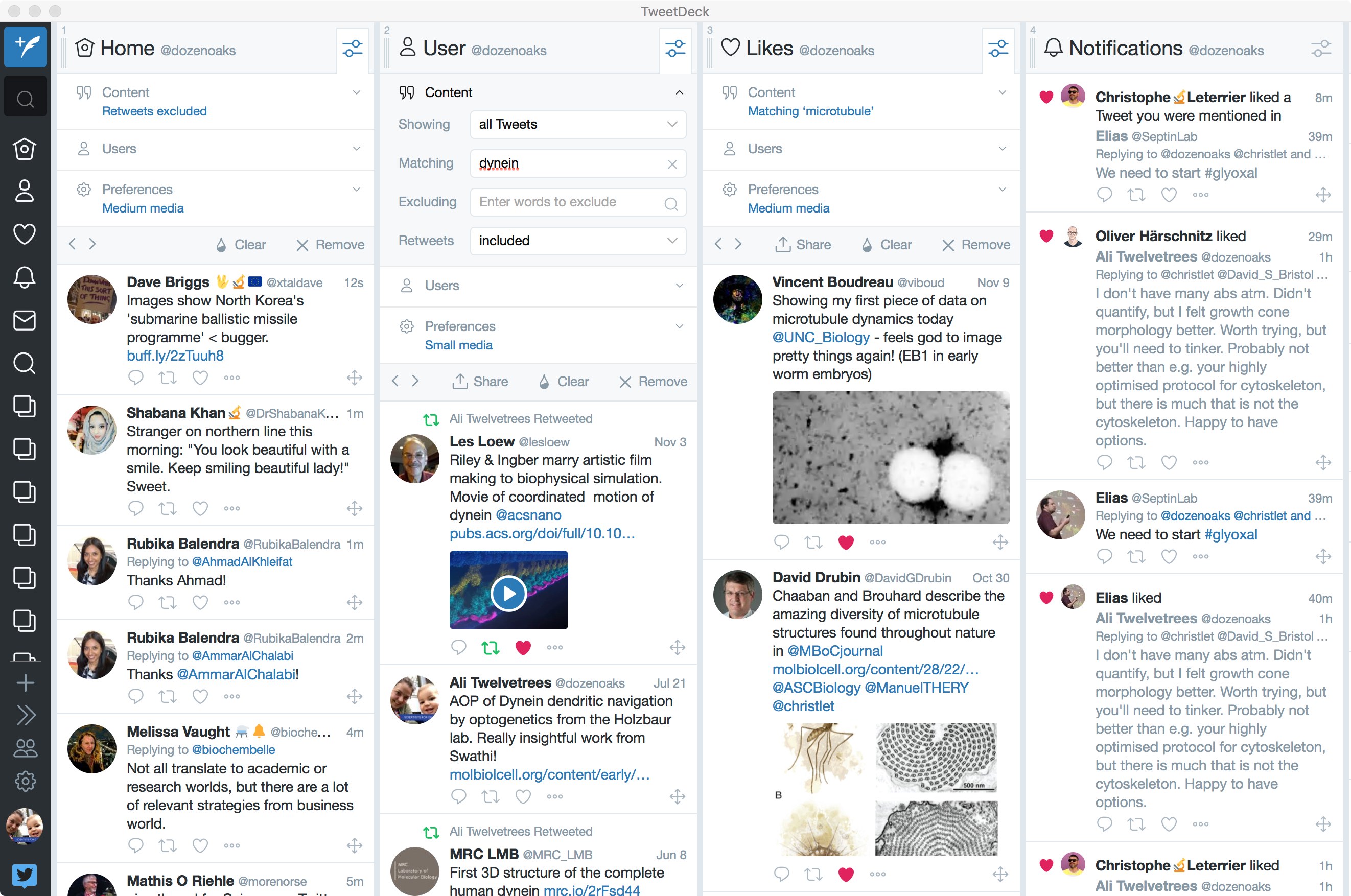 Collections (collection =/= moments) are an underused native twitter feature that I use a lot and really like. Essentially you compile a list of bookmarked tweets. Mine mainly consist of interesting paper and blog posts in various categories. You can add a tweet to a collection in tweetdeck (click the ‘…’ symbol for the option), but I also have an app called Charm on my iPhone. Charm shows up when I hit ‘Share via’ and lets me hoard stuff on the go (no idea what the equivalent android app is, sorry!). Because collections are a kind of timeline, you can also embed them easily onto websites too:

There are other options…

Tweetdeck is by no means the only option outside of the core twitter interface, and sci twitter as ever came back with plenty of options:

I abandoned Twitter app on mobile. Just use the website via Firefox (on both Mobile and Desktop). Data usage went down.

Tweetbot - incredibly powerful, cuts a lot of the crap, syncs across platforms.

CoreBird on Fedora. Twidere on Android.

A random bonus, because it really annoys me. A while ago twitter stripped instragram photos from posts shared via the instragram app. By using IFTTT you can post your instagram photos as native twitter photos so no one has to follow a link to your instgram account. You can set the applet to repost all of them or just those with a specific hashtag.